Over the last months, we have continued witnessing an alarming backlash against LGBTIQ rights all over Europe, with some right-wing governments, such as in Poland and Hungary, challenging the freedom and respect of LGBTIQ people. In March, the European Parliament took an historical step by declaring the EU an “LGBTIQ Freedom Zone”. One week later, the Lisbon City Council did the same at local level and since then many other European cities are following these steps.

Protecting and promoting LGBTIQ rights must start locally: if we really want Europe to be a place in which the fundamental rights of everybody are respected, we need concrete actions on the ground. For Pride Month, the PES Group in the European Committee of the Regions, Rainbow Rose and the Party of European Socialists launched a campaign for “LGBTIQ Freedom Cities and Regions”.

On 29 June at 18:00 CEST, in cooperation with the Global Progressive Forum, we will be gathering online to share best practices, ideas and experiences of progressive leaders from the European Union and beyond who are committed to protect and fight for LGBTIQ rights, together with Helena Dalli (tbc), European Commissioner for Equality, Iratxe Garcia Perez, President of the S&D Group in the European Parliament, Anne Hidalgo (tbc), Mayor of Paris (France), Sara Katrin Stjernfeldt Jammeh, Mayor of Malmö (Sweden), Jack Lewis, Massachusetts State Representative (United States), Fernando Medina (tbc), Mayor of Lisbon (Portugal), Els Robeyns (tbc), Mayor of Wellen and Member of Parliament of the Flanders Region (Belgium), Ivan Vuković, Mayor of Podgorica (Montenegro), and many more. The event will be moderated by Rainbow Rose President, Camila Garfias, and the State Secretary of the Brussels-Capital Region and PES group member Pascal Smet. 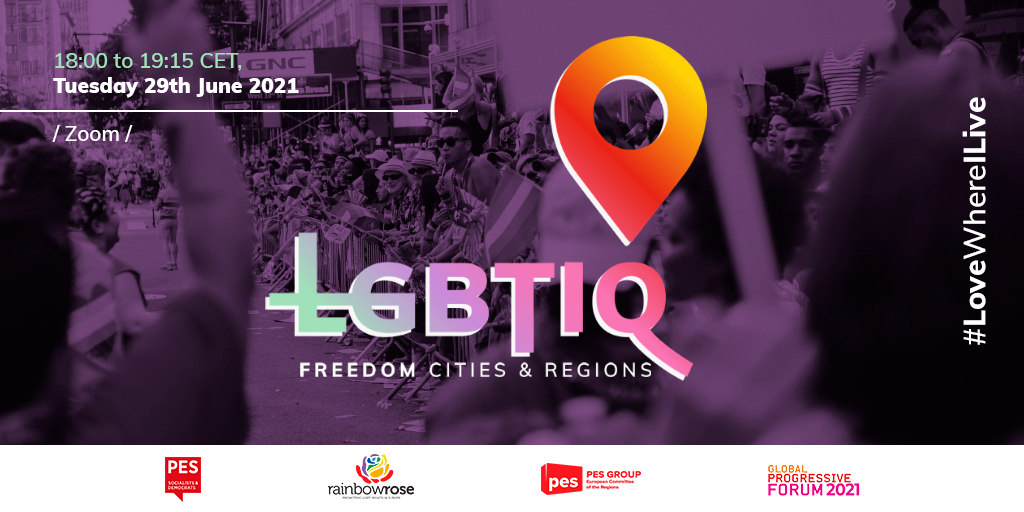 Links
Registration and further information
No